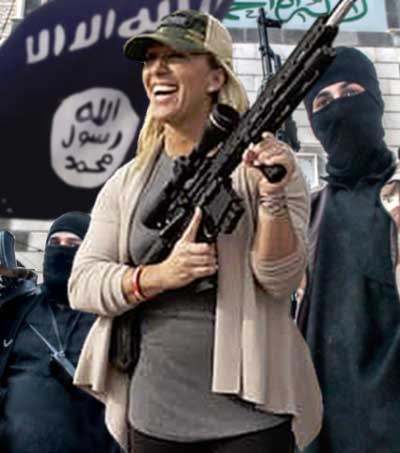 It's hard to believe that truck stop $2 sperm collector bitch would get to fame just because she is QAnon follower but such a miracle is possible if you born in USA.

Marjorie have introduced herself to movement a few years ago when she have volunteer to be ISIS mouthpiece and in the same time as representative of American Patriots resistance forces whose mission are to destroy Government of US.

Marjorie Taylor Greene always had soft spot for Islamic Jihad. Remember her denial of Osama bin Laden's al-Qaeda terrorists 9/11 attack on Pentagon? Marjorie's answer to that: Government conspiracy, attack never happened. Being bona fide racist herself, she always had deep believes that Jihadist are good people, fighters who would rather die for their way of life and World's Islamic domination.

Since al-Qaeda lost it luster and stopped excite Marjorie, her murderess attention have moved to the next best thing, ISIS. Few years back she made trip to Syria where she have meet with ISIS leaders and swear allegiance to ISIS ideology and sign up to be unofficial ISIS spokesperson. Way to go Republican Congressman Marjorie Taylor Greene.

These users thanked the author QAnon for the post:
kuhl