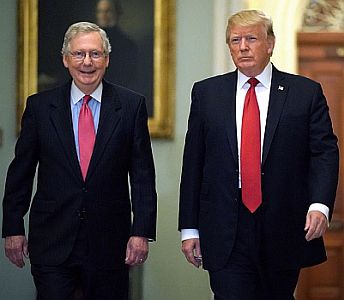 Gangster in White House and wuss in Senate

Gangster Donald Trump, illegitimate President of US of A took possession of White House, I must admit illegally and in the last one and a half year runs it like New Jersey Mob Boss. Well, comparing degenerate Don Trump with Mob Bosses would be insulting comparison for them because they at least running organization governed by ironclad rules whereas schmuck Trump is running White House like some cheap $2.00 Nevada's bordello.

One thing Republicans have proved beyond reasonable doubt, they have no idea how to Govern. Yes they were very good to lie their way to grab power and get elected to House in 2010, then in 2012 and 2014 to House and Senate and 2016 to House, Senate and White House but like that little puppy who managed to cut rabbit but couldn't figure out how to deal with it.

Take political prostitutes Senate's Republicans led by Mitch McConnell who somehow forgot that they took pledge to defend and protect the Constitution of the United States and not Putz Donald Trump and even war hero, American Patriot Senator John McCain surrender his pride and dignity to criminal carnival barker who have only one mission on his mind, how in the shortest possible time destroy what American people has been building for the past 240 years.

Well Ladies and Gentlemen of "Republican Senate", how does it feel to wake up in the morning, look at yourselves in mirror and see the face of Traitor who capitulated Country and sold the soul in exchange for a few Rubles to will of KGB asset Donald Trump and his handler Vladimir Putin. Do you realize how many people wish you choke on whatever these Rubles let you get in exchange?

I wonder if any of you thought about your grandchildren who would be embarrassed and would have to deny they are related to their Republican ancestry and just happen to share the same name and have nothing to do with a persons who had betray their Country? As to Trump's family name, his brood will be more than happy to change it back to Drumpf.
Top
Post Reply
1 post • Page 1 of 1