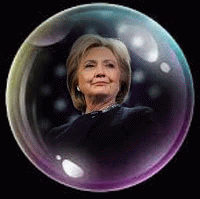 Hey Hillary, it's time for you to leave your bubble and start dealing with your Barnie problem.

Start telling, mostly young people, that Bernie is pulling their legs and he will never in his live time pass free tuition bill in Congress even if Democrats somehow manage to take it back from Republicans. Also, there never will be tax increases passed to pay for his wet dreams no matter which Congress he might get.

Of course Bernie can making up lies to people about Single payer Healthcare but it's your job Hillary to tell them about his lies and what he can and can't deliver even if names Karl Marks his running mate.

So, before it's too late, start talking and making sense about Barnie's nonsense.

#2 Re: Hillary leave your bubble

Very good point.
Hillary need to be more aggressive if she wants to win nomination and to burst Bernie's Bubble of Delusion he is stuffing with not too so bright or socialism infected or disillusioned people.
Top
Post Reply
2 posts • Page 1 of 1

Users browsing this forum: No registered users and 0 guests